Do cats use the litter box after you clean it? It must have happened that your cat is lining up right behind you while you are cleaning the litter box, ready to jump on it as soon as you move out. Why is that?

Cats use the litter box after you clean it because they like a clean box where they can hide the smell of their poop or pee. But, ultimately, since the litter box is clean and their scent is gone, they want to mark the territory again to claim proprietorship.

Let’s see why cats like to use clean litter boxes.

WHY DO CATS USE THE LITTER BOX AFTER YOU CLEAN IT?

Cats are clean animals; they like neat litter boxes because they have more space to cover their poop and pee. But also, cats like to mark territory immediately if you just cleaned the box and put new litter in it.

Some cats are picky and would not eat or poop if dealing with dirty things. Here are the main reasons for cats using the litter box after you clean it:

Cats like to use the litter box after they have placed new litter. So if you have just washed the litter box or thoroughly disinfected it, the first thing that your cat wants to do is to pee in it to make sure there is a little of his scent.

This is a way to claim the box as his own.

Some cats do not like dirty things. Maybe it is the strong smell that comes from dirty litter or the fact that if there is too much pee or poop, the litter is not enough to cover it. When that happens, the smell can be too strong.

This is a principal reason cats use the litter right after cleaning it. Maybe it was dirty, and they had to hold it for a long time.

At times there isn’t a specific reason. For example, your cat sees you trafficking with the litter and is attracted by the noise to come to the room and observe what you are doing. Finally, seeing the clean litter, he is stimulated to go to the bathroom.

I have an actual case study to support the claim that cats like to use clean litter boxes.

One day my cat Coco meowed really loud while looking at me. I looked back at him, and he started to move toward the bathroom. Since I did not follow him, he stopped, looked at me, and launched another loud meow.

This time I moved toward him, and he started to move toward the bathroom. I kept following him until he arrived in front of the litter box. He stopped, looked at me, and made an even higher pitch meow, almost crying.

I looked at him, then at the litter box. He repeated the meow and would not move from there. Finally, he was standing in front of the litter box. I came close. I saw that it was full of poop and needed cleaning.

Wait a moment. Was my cat complaining about the litter box cleaning situation? Was it even possible a cat could do that?

I decided to see if that was the problem or not. Therefore I clean his litter box. Coco was supervising the operation, of course, and attempted a couple of times to get into the box mid the operation. As soon as I added the clean litter, he was already in it, digging and pooping.

After that, he left satisfied, went to his bawl, and started eating. I was a bit puzzled.

Did my cat actually speak to me? Surely I was dreaming.

Conclusion: Definitively, cats do not like to use a dirty litter box; they want it cleaned. If they do not have a clean litter box, they may end up waiting for you to do your job and clean it out.

DO CATS GET MAD WHEN YOU CHANGE AND WASH OUT THEIR LITTER BOX?

Cats might react differently when seeing their owner changing their litter box. In general, most cats are not mad but intrigued. They follow the procedure closely. Although some cats might be upset when someone cleans their boxes, it is not a common reaction.

Some cats hide their poop in nature because they do not want other cats to know they are around. However, some other cats, often big cats, are not covering their poop so he can let other animals know that that is their territory, and therefore they should not enter.

In this case, they may attack you or act weird when you are cleaning the litter box. They are telling you to stop messing with their property. 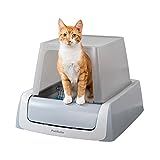 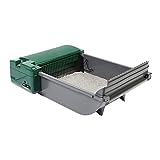 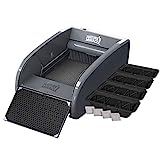 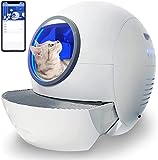 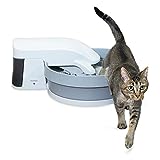 HOW OFTEN SHOULD YOU CLEAN THE LITTER BOX?

Out of experience, a good practice is to clean the litter box every day (every 24h). It also depends on how many litter boxes and how many cats you have. If you have one cat, once a day is enough.

Cats poop once or twice every 24h and pee 3 to 4 times (on average) during the same period. So it is clear that after 24h, your cat will run out of space for his poop and pee.

And the litter box will start to smell. If you have two cats and one litter box, it is better to scoop and clean the box every 12 hours ( in the morning and the evening).

If you have more litter boxes, you can get away with a prolonged period between cleaning.

HOW OFTEN TO REPLACE THE LITTER BOX?

It is good to find out how often one should replace a cat litter box. Most commonly around the web, you will find most sites recommending changing the box once a year. The reason behind it is that most litter boxes are made of plastic and cheap materials.

I tend to agree with this estimation; however, you can check your litter box’s state each time you clean it. You may want to change it even earlier if you see that it is too much consumed or stained.

WHY DO CATS RUN OUT OF THE LITTER BOX AFTER THEY POOPED?

Maybe you have seen this behavior from your cat before; he goes to the bathroom, and right after he has done what he must, he jumps out of the litter box and runs around the house. Is this normal?

They are convinced someone is running after them. Therefore, they want to run fast away from their poop; that smell can be how other predators find them.

WHY DO CATS MEOW BEFORE GOING TO THE LITTER BOX?

Cats meow before going to the litter box because they want to be watched while they are pooping. Also, if you are next to your cats, they feel more secure not to be attacked while they are in the bathroom, being that the moment of more vulnerability.

WHY IS MY CAT NOT USING THE LITTER BOX AFTER MOVING?

Cats hate changes, and due to the stress, they might not use the litter box once in the new house. As a result, cats might decide to stay in one place and don’t eat, don’t poop, and hide.

WHY DO CATS STARE AT THE LITTER BOX?

Another possibility could be the presence of another cat that uses the litter box. The new scent may intrigue your cat, who will not lose time being all over the litter box, smelling it, and staring at it.

Do cats care if you move their litter box?

Yes, cats care if you move the litter box. They don’t like it, so unless it is essential, do not do it. Cats are susceptible to changes. They are creatures of habit.

If you have to change the litter box place, you may want to pick up your cat and bring him there, so he can see that the place has changed.

Why do Cats Roll Around in a Litter Box?

Cats like to roll in the litter box, to leave their scent in it, to play (especially for kittens who have to dig into everything), and because they want to sand bathe.

Why is my cat standing on the edge of the litter box to poop?

Cats stand on the edges of the litter box because they can’t find the position to poop, do not like the litter, or have a problem pooping; maybe a bit of constipation is one of the reasons.

How do I stop my cat from playing in the litter box?

To stop cats from playing in the litter box, you should pick them up every time they do it, bring them to another room, and say the word “NO” each time.

Without screaming, just a decisive NO. I trained my cat like this, and each time he does something he should not, I say NO, and he stops in his track. It works most of the time.

For tiny kittens, this may be a challenging objective.

Why does my cat watch my other cat use the litter box?

Cats may watch the other cat use the litter box because they feel the other cat is intruding in his territory because of curiosity and the new smells. Do cats purr to each other? Of course, we are all familiar with cats’ purrs, and we enjoy them every day when petting our cats. But are they purring only when humans are around, or do they also purr among their peers? Cats purr with each other and with humans to convey different emotions. Cats… Do cats understand music? You may have noticed your cat reacting when you are playing music or even when sounds are coming from the TV. But does the music communicate anything to cats? Cats understand music. They can understand the vibration of the music and get various sensations depending on the tempo and the rhythm…. How to stop my cat from peeing in the sink? Sometimes cats decide that sinks are a better alternative to their litter box. It is not pleasant for cat owners nor hygienical, even though cats have a different opinion. But, how to make them shift their peeing habits? It is possible to stop cats from… Why does my cat sleep on my spot? If you are wondering why you can’t leave your chair or bed without your cat stealing your spot, you came to the right place. This is the subject of today’s article. Cats sleep on your spot after you left it because they like your smell, the spot…