Can cats share a litter box, or they need their own? What is the real answer to these questions? As a cat owner, we may be concerned that our cats may suffer from the fact that they have to share one litter box or that cats may stop using their litter box, deciding to use the house floor instead.

Most cats can share the litter box, and they would do it by themselves, recognizing that that litter box is the place where to do their poop. However, some cats may be picky about other smells and other cats using their litter and decide not to use their litter box anymore. Additionally, one litter box for 2 or more cats could not keep hygiene and a clean environment.

Let’s see what are our options.

Most probably, there is an answer to this question, as many cats’ personalities exist. Cats can be different because one cat would do one thing; it doesn’t mean the other would agree with it and doing. In other words, when it comes to cats, there are always variables and surprises.

The norm is that cats know that the litter box is the place to go to the bathroom for them. They know it because they saw their mother doing it, or other cats or have been litter box trained by someone.

Therefore cats can smell the litter and instinctively know that they have to use it. Cats would do it regardless of other cats. In fact, normally, cats would share a litter box with another cat without problems. I have had many cats, and no one would be fighting over a litter box with other cats. But, again, I may be lucky.

Some cats are very territorial, and they can attack another cat who is going near their litter box. In the best of the possibilities, they can stop using the litter box and start using the house as their bathroom.

Sometimes cats are spending hours smelling the litter box after a new cat came to use it. They can be really obsessed with their litter box. So, how to decide how to go about litter boxes with a multi-cat house? 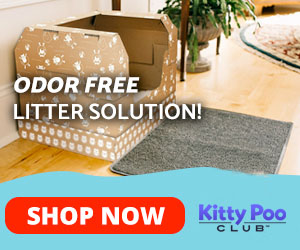 HOW TO DECIDE IF CATS CAN SHARE A LITTER BOX?

Normally, two cats should be able to share a litter box. But how to decide if this is the best way to go about it? First of all, are your cat picky about it?

You can find it out on the very first day. If they share a litter, are they going to the bathroom normally, or is one of them not using it? Is any of them making a fuss about it?

When you bring a new cat home, and he uses the already existing litter, and your first cat doesn’t create a problem, then you are set to go. You may need to clean the litter bok often, maybe every 12h instead of every 24h, depending on how busy your cats are using it.

Other considerations are regarding the size of your house. Do you have space for two litter boxes?

If one of them is not using the litter or makes a problem with the other cat using it, it is better to get another litter box. But, if you do not have space, you may have to get your two cats used on sharing.

The other consideration is about hygiene. With two litter boxes, you have more chances to keep everything tidy. When cats use one litter box, the litter gets dirty very fast, unless you can clean it often.

HOW TO GET CATS USED TO SHARE ONE LITTER BOX

If you are in a situation where you have two cats and can have only one litter box, it is important to keep it very clean. This may be helping a difficult cat to share his litter box with the other cat.

Therefore if you were used to cleaning the litter box every day, you would need to scoop it every 12h instead. A good idea would be to have a larger litter box. They should have more space available since they are two cats.

Cats are picky about the cleaning of their boxes, bowls, and themselves. Believe it or not, they can start complaining if their litter box is not cleaned. When they see the litter box dirty, some cats vocalize to their owners to let them know. Some others are more mischievous and would let you know by using the floor somewhere in the house.

Therefore, if you are down to a litter box for more than one cat, keep it clean and have a larger one.

HOW MANY LITTER BOX FOR 2 CATS OR MORE?

The normal rule is to have one litter box per each cat and one more. Vets and experts recommend this. This would also mean that if you have one cat, you should have two litter boxes.

Why is that? Well, cats may use their litter box to mark territory; they may like or want to have more solutions available. It could prevent them from going to pee or poo in other places in your house. For a cat with the issue of using the house as a toilet, an additional litter box could help.

What is happening in reality?

In reality, most pet owners do have one litter box per cat, and normally, it is just fine. We also find some cat owners having 1 litter box for their 2 cats, sometimes 3 cats.

Again if two cats are fine sharing, one can adjust the cleaning schedule and be set. With three cats and one litter box, it could be challenging to keep everything clean. I would suggest at least two litter boxes.

What did I do? I have two cats, they would be fine with one litter, but I am not. I have 2 litter boxes for them. They seem to be randomly using them, meaning they do not have “their” litter box.

They both use one and then the other, based on what they feel like. I have seen them both smelling one, then deciding to go to the other, and sometimes the other way around. Some days I see poop in one only and pee it the other. Sometimes in both.

PROBLEMS ON USING ONE LITTER BOX FOR 2 CATS

If you have more than one cat and are totally fine sharing one litter box, you are probably fine with the setup you have. Sometimes, there are problems and disadvantages of using one litter box only when there are 2 or more cats in the house.

Here some of the problems that can arise:

Here some related questions and answers:

Normally most cats would share the litter box, but sometimes you find that cat that doesn’t like it; he wants his space and doesn’t want other cats in his “bathroom.” You have to see how your cats react and adjust things as needed.

At times you can see that cats jump together in the litter box and try to pee in it simultaneously. It is entertaining to watch. I see this when cats are really impatient, and they really have to pee. Especially when you clean the litter box, it is not uncommon to see both cats jump in and deliver. They were waiting for it.

Most probably, 2 litter boxes are not needed if cats are fine with one, and you can clean it ofter. After all, if everything is fine, you can get going with one. But sometimes this is not possible, and you need to have 2 litter boxes.

It is fine to put two litter boxes next to each other. Some people say it is not fine, and cats may not like it. The only way to find out is to do it and see how your cats react. Not all cats are the same. Therefore some cats may not like it, and some others are ok with it. 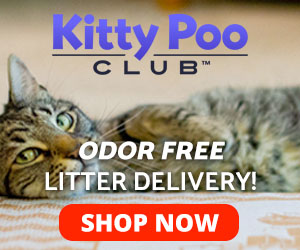 Can cats share a litter box after all? Let us know. I hope this was useful to you. If you want to add anything or ask a question, leave it in the comments below. Shares Facebook Twitter Pinterest LinkedIn Why do cats zoom after pooping? After using it, have you seen your cat running away like crazy from the litter box? If you did not know better, you could think that a huge lion was behind him. But that is not the case! Cats zoom after pooping because of… Shares Facebook Twitter Pinterest LinkedIn What are the best automatic litter boxes? Are you tired of scooping your cat poop? Or you want some more freedom? Modern technology can help. Sometimes, a cat owner needs to go away for a couple of days, or it may be missing for many hours due to work. It… Shares Facebook Twitter Pinterest LinkedIn What is the best corn litter for cats? Were you trying to find an alternative to the typical cat litter? Maybe a natural solution? Corn litter is one of the options available for cats. Today I would like to go over corn litter in detail. Corn cat litter is made…