Are you familiar with the American Curl cat’s personality? The American curl has curled ears and a sweet face that gives him a funny expression, but there is an extraordinary intelligence and shrewdness behind the appearances. But, what about the personality?

The American Curl has a sweet personality. He likes human company and likes to play with kids and humans in general. He is a good companion and enjoys human company. However, he dislikes to be left alone, and often he is needy and requires human attention.

Let’s see all the details about the American Curl cat’s personality and how to take care of this beautiful cat.

The American Curl is a sweet cat. He likes to play a lot, even when older. Because he wants to play, he needs ample space to find enrichment in the form of cat toys or jump on cats treas. In addition, he needs scratching posts for his nails and requires someone to play with him.

This type of cat is also loving, intelligent, and dynamic. It is not a cat for people who are looking for a lap cat. He loves open spaces but can live indoors too, mainly because he likes companionship.

The American Curl likes kids and likes to play with them, and he doesn’t like to be left at home alone. He can feel lonely if that happens. He wants to be at the center of attention and likes to have people around him.

He can hardly manage to be alone for few hours, but only if he can receive plenty of attention, scratches, and a lot of pats under the chin when everyone is back. He is a type of cat that is friendly with strangers and other pets.

The American Curl is a young breed. The first time someone saw a cat with curled ears was in 1981 when two Californian people (Grace and Jow Ruga) found two kittens in front of their door, obviously abandoned.

They took in the two kittens, fed them, and adopted them. The female had the cute peculiarity of curled ears. She was named Shulamith, which means “peaceful.” We can safely say that she was the mother cat of all American Curls cats. In fact, she gave birth to four beautiful kittens.

The Californian couple started a collaboration with another passionate cat person to breed new cats with this particular characteristic. And with this, a new breed of cats was born. The official recognition was given in 1985 by the International Cat Association.

The American Curl cat is easy to recognize for its curled ears. It is the most significant trait, but it is not the only one.

Here are the rest of the characteristics:

The ears are curved, but they are not creating any illness. The only thing that is required is routine cleaning. Once a month, the American Curl ears must be cleaned accurately using a cotton round and warm water.

The fur doesn’t require colossal maintenance, but a wise owner would brush his American Curl at least once a week. The American Curl is a greedy cat and likes to eat a lot. A diet based on meat, fish, vegetable, and quality dry food is good for this type of cat.

In addition, some egg yolk from time to time can help keep the fur shiny and healthy. The Americal Curl likes cheese a lot. If you want to spoil him from time to time, choose cheese deficient in fats.

Another critical aspect of the care of an American Curl is enrichment and play. If the cat cannot go out, make sure he can play and climb as much as he wants.

Here are some cats trees ideas for the American Curl: 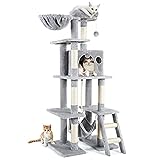 Unfortunately, the American Curl can be costly if gotten from a breeder. If adopted from a shelter or privately can cost way less. The typical price for an American Curl kitten can vary from $500 to $3000.

Adoption prices can carry between $50 and $150. Here are some sites that you can visit to find American Curl breeders:

It is always better to adopt a cat from a local shelter to give hope to a lost soul, but it may be challenging to find it in shelters if you want an American Curl. Always verify the breeder credentials and the conditions of the cats before proceeding.

Do American Curls have health problems?

American Curls do not have health issues. However, sometimes they can get ear infections because they cannot easily clean their ears. Cats owners need to help the American Curl with ear cleaning every week to avoid wax accumulation.

Why do American curls have curled ears?

American Curls cats have curled ears because of a spontaneous mutation. Breeders encountered this cat with spontaneous curled ears and decided to breed it to create a new cat breed.

Are American Curl cats in pain?

American Curls are not in pain because of their ears unless they get an infection or an illness that creates pain. Then, naturally, the curled ears are not painful. Kids and people should not pull the American Curl ears.

American Curls can be short hairs or long hairs. The long hair one can shed more than short hair. But in general, this can doesn’t shed a lot.